At the cusp of change

This dual polarising shift resulted in the 35mm SLR ruling the roost but importantly, the process was not without its issues. The key advantage was user friendliness and compactness without sacrificing performance and versatility, which were attributes users from both sides found appealing in the 35mm SLR. However obvious all these may be, we do, after all, live in a world of set ideas. As they say, teaching an old dog new tricks is never an easy thing to accomplish and for good reasons.

The improbability to change mindsets

As everyone will tell you, it’s never easy to change mindsets. Contemporary thinking at that time suggested that roll-film cameras were the way to go. Coming from the large wooden view cameras, the roll-film cameras were compact, easy to handhold and exceptionally portable. Roll-film cameras then were an example of downsizing and the exercise was convincing enough for the buying public to own and use one without feeling encumbered. 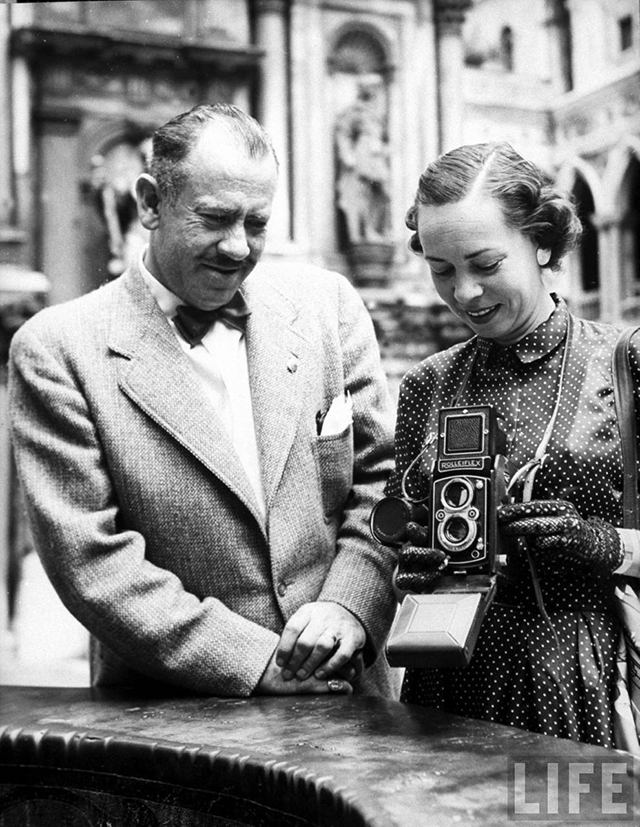 Women who occasioned photography were equally as adept at using the roll camera. Back then manual controls were the norm and so was using an external light meter. Not surprisingly women were equally up to the task. Believe it or not, people actually understood the complexities involved with Exposure Values (EV), shutter speeds and apertures. They were prone to work off tables and charts to get to the right settings. Cameras were as sophisticated as their leaf shutters and manual aperture diaphragm control allowed them to be.

Having been accustomed to the roll-film form factor, hardly anyone believed the camera could get smaller or lighter or better. The roll-film camera was the standard bearer even for the average consumer. In contrast the first-generation 35mm SLR camera was probably perplexing and intimidating. It was an ‘unknown’ proposition; after all it was also a commercial experiment at that time. When pitched against the ‘trusted’ roll-film camera, not many would have prepared themselves to be bold and prudent at the same time.

Missing out on a golden opportunity

There were two camps in the European-dominated camera industry at that time – those who felt the potential of the 35mm SLR was worth exploring and those who held back, not willing to make the jump. The initial years were difficult and clarity of vision was lacking; the need to push ahead with the new format had met with resistance.

On the other hand, the Japanese were putting together a more solid argument for the 35m SLR and in the process, began to transform their own industry. In post-war industrialised Japan, the 35mm SLR was a key turning point in as much as the rise of the motorcycle and the compact four-cylinder motorcar. And once electronics began to filter into many different industries, its effects on the 35mm SLR camera were profound enough to significantly impact the Europeans. For the Japanese, electronics were its liberators; for the Europeans, they were their downfall.

While the Europeans were dithering, the Japanese took opportunity with the arrival of electronics to be bolder and more willing to try out new ideas. And of course with electronics, the Japanese were also better able to exploit its lower production costs, which then made their cameras better value.

Image quality is all that mattered

That’s like saying the most important part of a motorcar is its engine without paying attention to any of the other aspects. Even if the engine is very well designed and capable of performing at the highest level, what good would it be if the car was uncomfortable to sit in or is too cramped or it’s simply very unattractive? Similarly what good would a camera be if the image quality is excellent but was too cumbersome to carry around or handle?

It appeared that the Europeans had struggled with this concept. Not only were they sceptical of the smaller 35mm film size, they were equally disdainful of any other aspect of the camera other than the sheer solitary importance of image quality. To them, image quality is so important that everything else paled into significance. In not so many words, Leica does appear more likely than any other non-medium format manufacturer to continue to display such behaviour today. 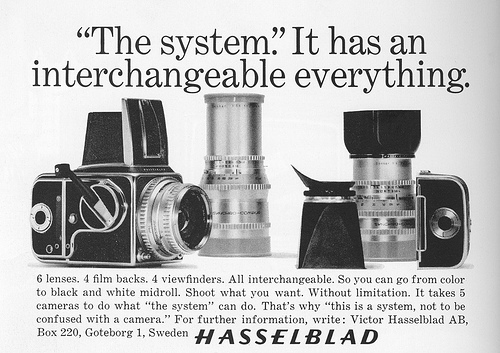 From a cold numerical standpoint, the Europeans did have a point: Using 120 roll film, the square format popularised by Hasselblad measured 6 x 6 cm and offered a total image area of 3,600mm2. The smaller 6 x 4.5 cm format preferred by the Mamiya 645 and the Zenza Bronica ETRS had an area of 2,700m2. There was also the 6 x 7 cm format of which the Mamiya RB67 and Pentax 6×7 were the most dominant. Their film size area measured at 4,200m2. If we consider the Linhof Teknica’s 6 x 9 cm format, the area bloated out to 5,400mm2. No matter which one you choose of the three, they dwarfed 35mm film, which stood at an area of only 864mm2. 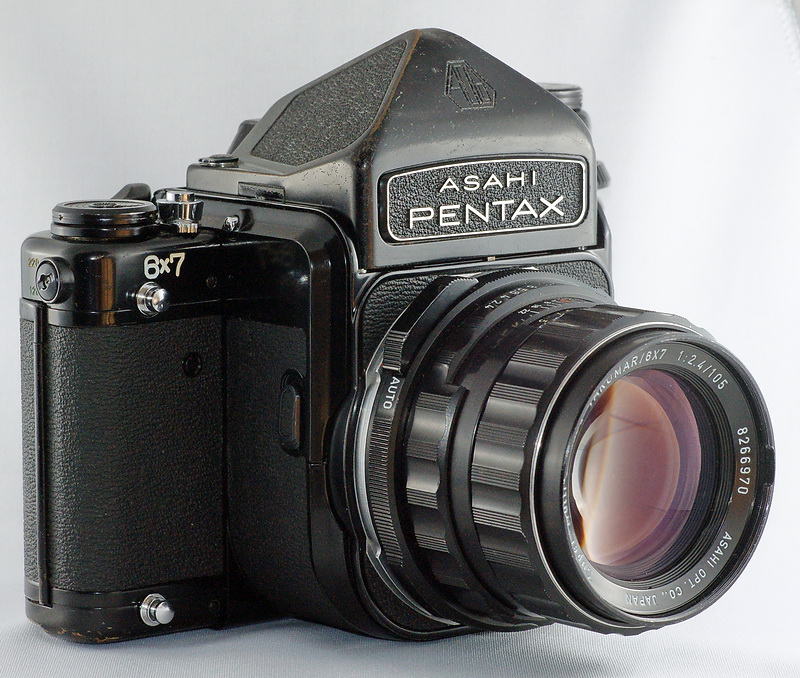 Technically speaking, the larger the film size, the higher the resolution and the clearer the images produced. But at a cost of heavier, larger and clumsier equipment, that was a large sacrifice; obviously large enough not to be considered feasible by today’s standards. Back then that was the challenge that the 35mm SLR faced. Evidently roll-film camera manufacturers were content that superiority in the area of image quality was more than enough to resist the changeover to the smaller film format.

In fact it was not uncommon for camera makers to regard the 35mm format as anything but serious, all because it lacked the quality – and hence prestige – as the larger medium formats. As they drive themselves to an unassailable level of self-belief, it became a no-brainer that sticking with the tried and trusted was better than sticking one’s neck out for an unproven and smaller film format.

For the established leaders of the camera industry at that time, image quality was the unassailable point of the argument. They were convinced that buying decisions were logically going to revolve around image quality. The reasoning was simple – one purchases a camera to take pictures and therefore picture quality had to be the most important aspect of the camera. But in hindsight, it’s easy to see how such an argument so obviously missed the point but at that time, it was all they could understand and accept.

There’s no doubt about this – the Europeans had clearly underestimated the Japanese resolve. Although Japan emerged from the Second World War heavily damaged – both materially and spiritually – their determination to find their footing again was something many had underestimated. Very few had expected a Japan that was under critical reconstruction could become so competitively so quickly; certainly not the Europeans who coveted their own ability to innovate and lead the world.

European industrial and design excellence had been the driving force behind the development of the camera. So the camera would be, like the motorcar or anything exquisitely mechanical, one of many bejewelled crafts of European thinking. The camera was cultural evidence of European supremacy, of the innate ability of the Continent to invent things, of creating technologies and of advancing society as a whole. As bombastic as all these may sound, the fact remained that Europe was at the epicentre of product advancement and the camera was simply a very good example.

And perhaps there are good reasons why the Europeans had felt this way at that time – almost every household that had a camera would know it by European brand names like Exacta, Edixa, Bessa, Zeiss, Voigtländer, Ikonta or Contax. They were as common garden to any European family as the Hill’s Hoist is to an Australian. With that in mind, any thoughts of Japan competing on the same level as the Europeans were either unheard of or abhorrent.

All of these may sound over-critical of the Europeans but indeed that was the situation at that time. It was probably a good time to be a European but it was also obsequious to think that such supremacy could go on forever. One can draw parallel to the time when the impact of the Japanese compact car was most felt during the first oil crisis that crashed the U.S. economy just as the Muskie Act came into being.

American families were bred on fuel guzzlers supplied by an American auto industry that was essentially caught napping. The moment began to shift when people began to realise that they could get better quality, more economical and lower priced cars from the Japanese. Once that happened, the future became very different and the American auto industry was forced to make painful changes amidst massive financial losses all because they had failed to understand what the Japanese were offering to the public. In other words they did not embrace change. 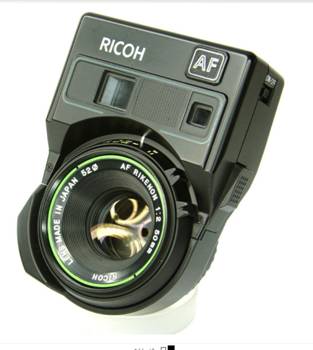 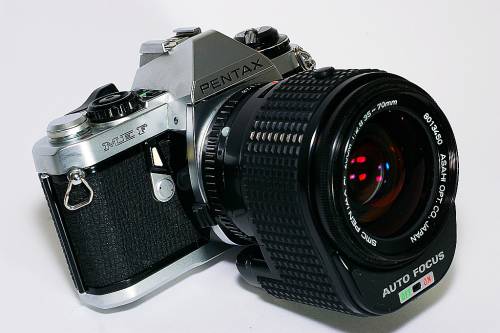 Twenty years before then, the same was taking place in a camera industry that was perched in the centre of Europe. The Europeans were about to be taken by storm by Japanese camera manufacturers. And their trump card was the compact 35mm SLR camera.

Needless to say, the Europeans paid a heavy price for their ignorance. The change came and no one could stop it and soon the industry weathered a transformation that would forever alter its complexion. As early as 1980, the industry was to undergo yet another paradigm shift. From being purely mechanical and manual to auto electronics, the 35mm SLR now began to embrace autofocusing although the road to commercial success would take five years. 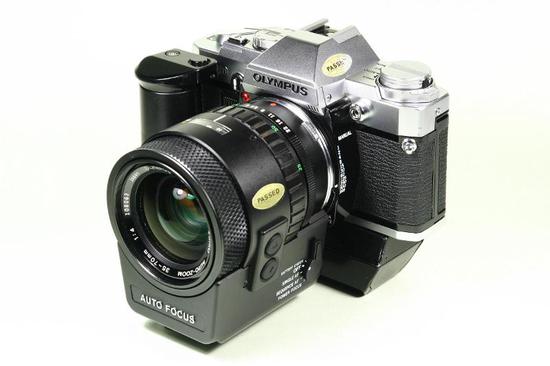 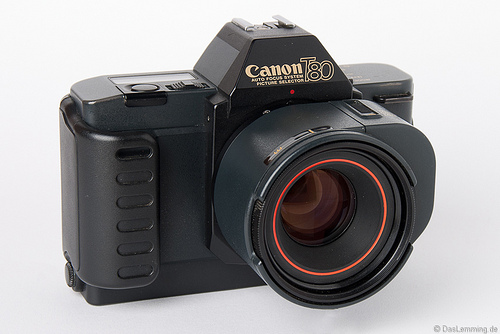 In that period, we witnessed many camera makers riding on the first generation of autofocusing with much of the innards cramped into the picture-taking lens. Lenses like Ricoh’s AF-Rikenon 50mm f2.0 (1980) showcased the Cyclops-style appearance. Others like Chinon, Canon, Olympus and Nikon had their versions as well.

In 1981, the Pentax ME-F appeared with portions of the AF electronics embedded within the camera body in order to complement the SMC Pentax-AF 35-70mm f2.8. The integration brought forth a new info display within the viewfinder to incorporate AF indications. Two years later, Canon and Olympus released the T80 (1983) and OM30 (1983) respectively, both of which were not much different. As a stop-gap technology, it had its place in history but it was hardly effective. Autofocusing performance was sluggish. It was easily fooled. Lowlight confused its operability. Handling the lenses was tricky since they were essentially unbalanced. And the AF lenses were prohibitively expensive considering its lack of effectiveness. However by 1985, everything changed.

go to next chapter: History Spells the DSLR’s Demise - chapter VI - 1990s - The age of change and denial