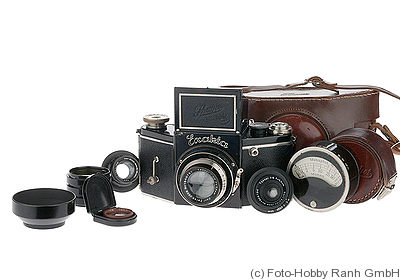 In 1933, IHG (Industrie und Handels Gesellschaft of Dresden) or Ihagee created the VP Exacta (“VP” for Vest Pocket) to become the world’s first single-lens reflex camera. It might not have used 35mm film but it buckled the trend by offering a new camera architecture that would change the way we use and think of cameras. The idea itself was not really new – a British patent revealed a design that was long in place by 1861 with an invention by a certain Thomas Sutton although only a few of his SLR cameras ever made it out of his shop floor.

It took another 23 years before the first SLR camera went into production in, of all the places, the U.S. courtesy of the Monocular Duplex (1884) by Calvin Rae Smith. Around that same time, a few other competing designs had also surfaced from Belgium (1889), England (1894) and Germany (1896) including America and Japan. However none of these of course utilised the 35mm format since it hadn’t been commercialised back then. Nonetheless just to give us an idea of where we’re technically at, at this point in time, there was the A.D. Loman Reflex Camera from Holland, which not only featured the first known example of a focal plane shutter but one that was capable of squeezing out 1/1000 second while its leaf shutter contemporaries were maxing out at 1/250 second.

Perhaps surprising to the uninitiated, the fact is that the reflex camera design could trace its roots all the way back to 1676, which would predate the arrival of photography by 150 years. This was when the camera obscura offered a reflex mirror in its construction. But interestingly it was nowhere as popular as an actual camera as it was as an epidiascope, which is a contraption that artists used to project images of both opaque and transparent objects on to a wall much akin to an optical projector. This way, artists could trace the projected image on to a ground glass in order to produce artwork that was as realistic as possible. 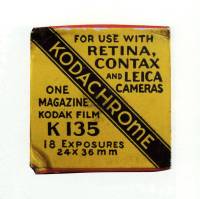 In 1935, a new format known by its code number ‘135’ was born. Its creator, Eastman Dry Plate Company (later known as ‘Eastman Kodak’) had successfully conceived the 35mm film, measuring 24 x 36mm, which was double the frame size of the earlier 35mm cine camera format. Intended for use by its own Retina camera including Zeiss Ikon Contax and Ernst Leitz’s Leica rangefinder, the new 35mm film featured an acetate base with double perforation and then housed in a unique felt-line light-tight metal cartridge that carried its own patented design. A year later came the first Kodachrome colour film rated at ASA 8 and available in the new film format.

The 35mm film format got off to a promising start. Three years after the release of the Exacta A (1936), Ihagee launched the Kine Exakta and began a series of such cameras that standardised on Kodak’s new film but of possibly even greater interest was the 1934 unveiling of the Gelveta designed by A.O. Gelgar and manufactured by the state-owned Leningrad-based GOMZ (Gosudarstvennyi Optiko-Mekhanicheskii Zavod). Eventually called and sold by the name Спорт (Cyrillic for “Sport”), this was to be the world’s first 35mm SLR camera if not for the fact that the Russians took a further three years to commence commercial production. That delay meant that honours went to the German Ihagee Kine Exacta. 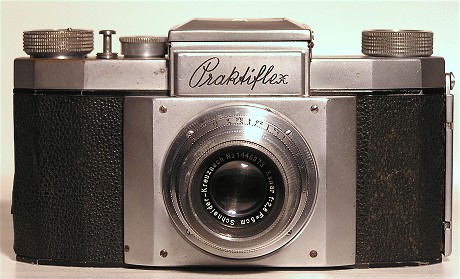 Zeiss was also in contention with Ihagee but the outbreak of war curtailed their SLR efforts. In fact they had to wait until 1949 before they could resume production and released their first effort – called the Contax S – in East Germany and with that, the company popularised the famous M42 screw lens mount. Praktica (formerly known as Kamerawerk Niedersedlitz Dresden or KW), which launched the Praktiflex ten years earlier (1939) at the Leipzig Fair, had by then claimed the title of the most produced 35mm SLR camera courtesy of some obtuse German reparation efforts exacted by and beneficial to the Russians. Two years before the release of the Contax S, the Hungarians had also gone into the act with their Duflex and in the process, became the first in the world to offer an instant-return (reflex) mirror